Women are facing a huge pension gender gap, and unless something is done to tackle it, millions risk ending up with retirement incomes which are thousands of pounds lower a year than men. For those who are unsure, the phrase term ‘gender pension gap’ describes the difference in percentage terms between what women will expect in retirement income compared to their male counterparts.

Our research reveals that throughout the UK there are huge differences in the value of men and women’s pensions. As anticipated, in some regions of the UK that gap is almost 50% meaning that some women will retire with half of what men do.

Here, we look at how the pension gender gap varies in different regions of the UK, and what steps women can take to help close the gender gap. 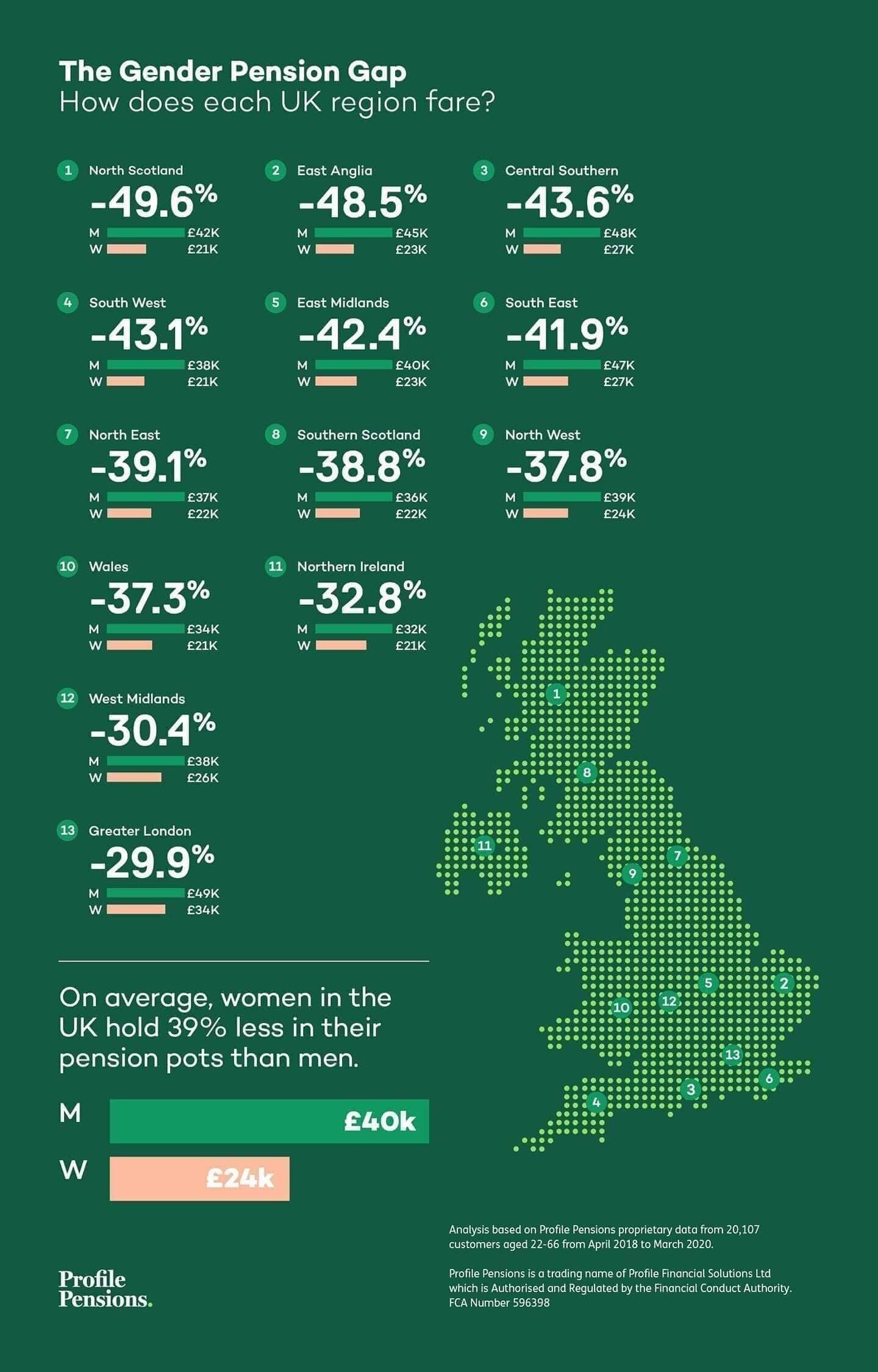 One of the biggest factors is that men often earn more than women and until that is fully addressed the pension gap will continue to exist. This is because the amount we save through workplace pensions and our employers’ contributions is usually directly linked to our incomes.

Women also often take time out of the work place to bring up children, or to care for elderly relatives, impacting on the amount they can put away for the future and also increase the paying gaps in state pension.

Another reason is that many women work part-time, and their incomes are below the £10,000 threshold which means they will not be automatically enrolled into company pension schemes.

Our own research also highlights the imbalance between how much men and women are saving for the future. We looked at all the pensions we’ve reviewed and found that women have an average pension pot value of £17,898, compared to £25,271 for men¹.

Profile Pensions looked at data from more than 20,000 customers aged 22-66 to discover which areas of the UK have the biggest and smallest pension gender gaps.

The region with the lowest pension gender gap is Greater London, where the value of the average man’s pension pot is 30% higher than the average woman’s. Men in Greater London have an average of £48,778 in their pensions, compared to £34,174 for women, a difference of £14,604.

What women can do about it?

Many commentators argue that we need government intervention to help close the pension gender gap. This could include, for example, scrapping the auto-enrolment minimum allowing part-time workers who earn less than £10,000 per-year to be automatically enrolled into a pension scheme.

But there are also things women can do to help boost their retirement savings. Here are our top tips to boost contributions.

Get to know your pension

If you don't have these answers, that's a first alarm bell ringing. Profile Pensions can help you trace your old SERPS and workplace pensions (service also available for free through HMRC), but once we receive the pension funds statements we can help you understand how to better invest it.

Are you able to boost your monthly contributions?

Look at ways you might be able to pay a bit more into your pension every month. A good way to do this is to sit down with your bank statement and see if there is any non-essential spending you can cut back on, so these savings can be redirected into your pension. It doesn’t have to be a big amount – even cutting out that coffee on the way to work could save you around £50 a month if you’re buying one every day. The new redirected pension savings can always be paused or cancelled if needs be.

Under child benefit rules, families where one parent earns over £50,000 have their benefit reduced gradually until their income reaches £60,000, at which point the benefit is lost completely. Even if you will have to pay back some or all of your child benefit in extra income tax if you or your partner earns more than the £50,000 threshold, it’s still worth registering for it. Registering means you’ll get the National Insurance credits that help you qualify for a state pension. You usually need to have 10 qualifying years on your National Insurance record to get any State Pension, and 35 qualifying years to get the full State Pension.

Not all pensions are the same, so there’s a chance you might be able to find a better one. You could, for example, find one with lower charges, or a better range of funds to invest in. Make sure you seek professional advice if you’re not sure whether to switch your pension and remember that you may not always be able to improve on what you’ve got.

Unsure whether your pensions are working as hard as you are? Contact us today.

3,864 individual pension pots from new prospect customers we analysed between 1st May and 31st Oct 2018

Have you got a mis-sold SERPS pension?