The impact of pensions

It's estimated that by 2030, at least one in five people – equivalent to 21.8% of the population – will be aged over 65. With an increasingly ageing population and the challenges this presents, pensions have never been such an important and relevant topic.

Despite this, you may not have given much thought to where your pension contributions go. You may not even consider yourself an investor. However, if you have a pension, you certainly are. But what do we really understand about the impact of pensions beyond providing us with a regular income in our old age?

Our money is surprisingly powerful and can shape a more sustainable future for everyone. There is around £2.6 trillion currently invested in pensions in the UK and over £50 trillion worldwide. Everyone feels the effects of this money. It's invested on our behalf into the money market, bonds and gilts, property, and shares in companies to build prosperity for the future and the world around us. This money is also used to fund all kinds of projects from essential government services and wind farms to deforestation, weapons, and the tobacco industry.

While it was only a few years ago that a mere 1% of the world’s largest pension funds were invested in low-carbon alternatives, our pension investments can be a force for positive change. Ethical pension investments can be up to 27 times more effective in creating sustainable solutions for the future than lifestyle changes such as reducing energy and water usage, driving or flying less, or even eating less meat.

Not only can our pension money be invested in companies that play a crucial role in tackling global crises such as climate change and inequality, but funding from pensions can also exert a powerful influence over the direction companies take.

Following what started as a trend in investment markets, sustainable finance has recently gathered significant momentum, especially after new regulations encouraging pension fund Environmental, Social and Governance (ESG) compliant investments. As governments worldwide commit to green initiatives, so too are pension funds. Ethical pension investing largely began by avoiding investments related to gambling, the arms industry, and tobacco. In the early days, these had mixed results. However, today ESG funds are more than holding their own, as seen during difficult economic conditions brought about by the COVID-19 pandemic.

The growing influence of Generation Z and millennials, keen to work for and support the growth of firms that share their values, can be added into this mix. The shift towards sustainable investments is only going to become more pronounced. But what are ethical investments, and why do they matter?

Socially responsible pensions: what are they?

Many pension holders are increasingly insisting that the firms their pension funds are invested in are socially responsible. They want their money to fund the activities of organisations that create healthy products and services, treat their employees respectfully, promote inclusivity and diversity, and avoid unethical business practices. Fortunately, there's now a far greater opportunity to use our pension money for good. There are now many examples of ethical pension investments.

It's easy to underestimate the depth of pension investments' impact. But as pressure mounts to act on climate change, shifting pension investments could be key to a green transformation. Moving the value of an average pension in the UK to a sustainable alternative can eliminate up to 19 tonnes of greenhouse gas emissions, equivalent to three times the average UK carbon footprint. According to research from an investment group, transferring a pension worth £100,000 that was invested in oil and gas companies to a portfolio with a positive impact can equate to taking up to six cars off the roads each year.

Infrastructure is essential to any country's ongoing economic development and prosperity. In the UK, infrastructure includes housing, broadband and telecommunications, new and upgraded railways, electric vehicle charging points, renewable energy sources, environmental protection projects, schools and hospitals, flood relief schemes, and sewage treatment. These assets contribute to the quality of life, higher growth, promoting economic inclusion, and facilitating trade and connectivity. As the need for improved infrastructure grows, so does the need for investment, with estimates indicating that the UK will need to raise spending on infrastructure to as much as £40 billion a year over the coming decade.

While pension fund investments may not be sufficient on their own to fill the infrastructure investment gap, they do have the assets required to make a substantial contribution toward building and maintaining the country's infrastructure. Pension savings' long-term nature and inflation-linked income make them a good match for infrastructure investments. Investing in infrastructure can provide an ideal return profile for pension funds, especially when the government is underwriting the returns. These types of investments can help to improve the diversification of a pension fund's investment portfolio while creating new opportunities to invest in different sectors and asset classes, and assisting with reaching higher returns.

Local authority pension schemes invest around 1% of assets in infrastructure. However, doing so attracts higher charges, which in turn can deliver lower potential returns. Investing abroad rather than just in the UK means that the funds won't only be helping the UK's long-term growth.

Pension schemes directly investing in well-managed infrastructure projects and underwriting some of the long-term returns will help the government improve its funding position and the UK economy at the same time. This can be a far more rewarding position for the government than spending billions on making up public pension deficits in the future.

In 2012, the Pensions Infrastructure Platform (PiP) was launched as a not-for-profit investment alternative to help make investing in infrastructure more accessible for pension schemes in the UK. It pools together resources into a single investment fund that enables pension schemes of all sizes to invest in national infrastructure projects. It was formed as part of a collaboration between the Treasury, the National Association of Pension Funds (NAPF), and the Pension Protection Fund (PPF). It initially attracted 10 founding investors, including RMI, LPFA, the PPF, British Airways, the BBC, BAE Systems, Lloyds TSB, and BT. In 2020, PiP was acquired by the infrastructure and private equity firm Foresight Group. 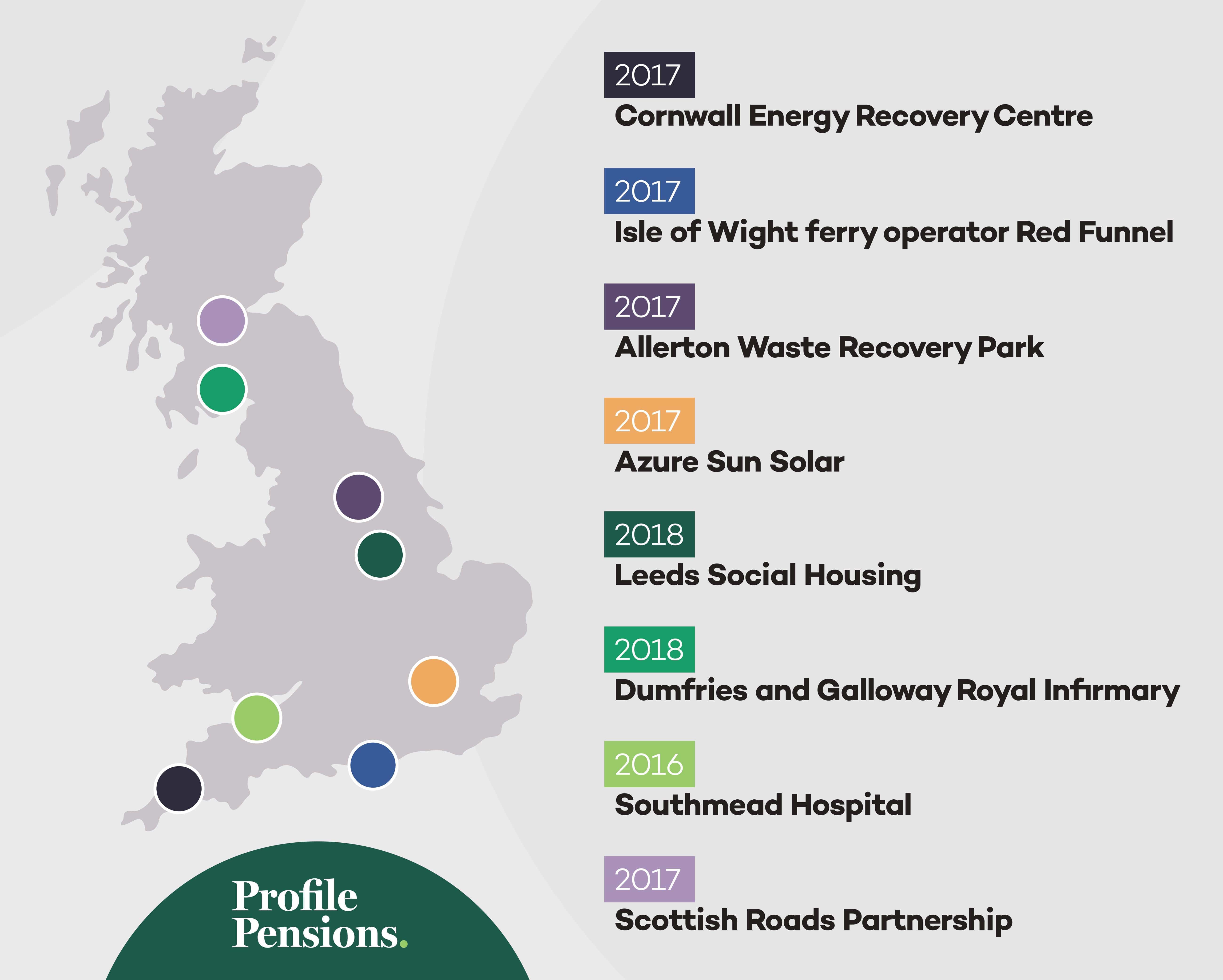 Some of the investments PiP has made include:

Do you know how your pension is invested?

A staggering number of people live in ignorance regarding their pensions. Around two-thirds of people don't know where their pension money is invested. After joining a workplace pension, it's common for pension contributions to be automatically invested in a fund on the employee's behalf. This might be the pension plan's default fund that the pension provider will have selected to meet the needs of the majority of its members.

Most employees remain in the company’s default fund that they were initially enrolled in for the duration of their employment. This means that they could be investing in industries and companies that conflict with their views and values, such as coal, tobacco, mining, gas, gambling, or arms. But it's possible to take more control over our pension funds by finding out where our money is going and switching to a different pension fund that better suits our values if we wish.

While it's easy to take a step back and simply leave it all up to the pension plan provider, a pension is one of your most valuable assets. Regularly checking in on how your pension is doing and where your money is invested ensures that your long-term future is on track and there won't be any unfortunate surprises. You’ll also have peace of mind that your money is going towards supporting the betterment of society and the world around us.

How our service compares against others

Why should you look for any lost pensions